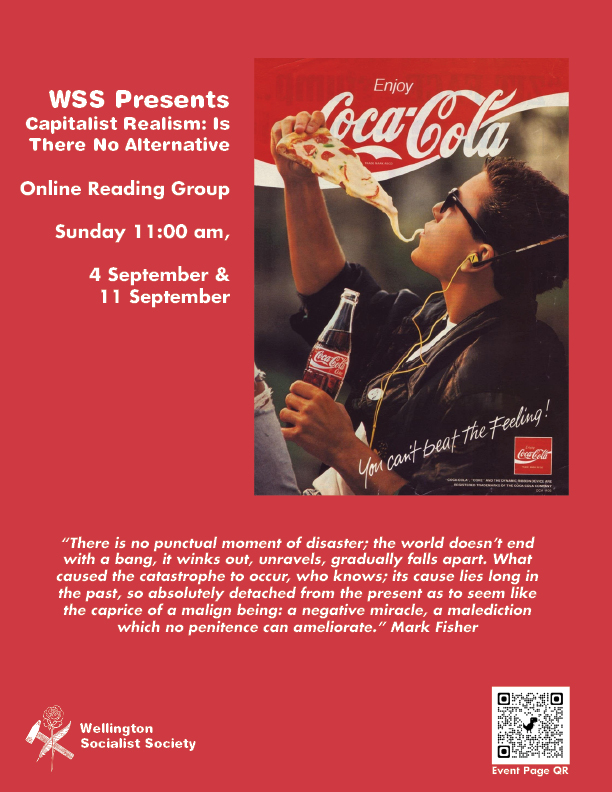 WSS welcomes you to our first virtual reading club of 2022. We are starting out with a classic of the twenty-teens, Mark FIsher’s Capitalist Realism: Is There No Alternative. If you have never read any “Theory” text before, CR is a very accessible work that introduces readers to various thinkers from Spinoza and Zizek to Marx and Deleuze and many more. Fisher’s work has nourished a generation of readers on the left and lays out a compelling case that, for the time being, history seems to have been slowly cancelled, and we find ourselves stuck in a cultural loop of nostalgia and repetition.
We will look to cover up to the end of chapter four in this event.
ZOOM LINK:
https://us06web.zoom.us/…/82589744638pwd…
PDF: https://files.libcom.org/…/Capitalist%20Realism_%20Is…
Synopsis:
“It is easier to imagine the end of the world than the end of capitalism. After 1989, capitalism has successfully presented itself as the only realistic political-economic system – a situation that the bank crisis of 2008, far from ending, actually compounded. The book analyses the development and principal features of this capitalist realism as a lived ideological framework.
Using examples from politics, film (Children Of Men, Jason Bourne, Supernanny), fiction (Le Guin and Kafka), work and education, it argues that capitalist realism colours all areas of contemporary experience is anything but realistic and asks how capitalism and its inconsistencies can be challenged. It is a sharp analysis of the post-ideological malaise that suggests that the economics and politics of free market neo-liberalism are givens rather than constructions.” (https://www.johnhuntpublishing.com/…/capitalist-realism)
Details